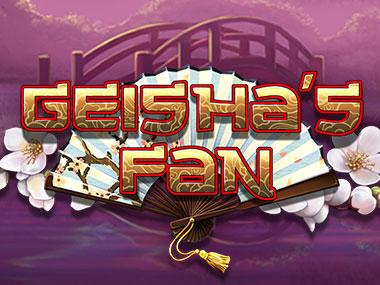 Do you want to try your luck with an oriental-themed slot machine? If that’s the case, we recommend that you take a closer look at Geisha’s Fan. This is a slot machine about traditional Japanese female hostesses and entertainers. Geisha emerged in the 18th century. Geisha’s Fan on the other hand came out on the 20th of October, 2016 and was created by Tom Horn Gaming.

Geisha’s Fan comes with 5 reels, 3 rows, and a total of 9 paylines. In order to get a payout, you’ll need at least two to three identical symbols from the leftmost reel to the rightmost reel. If three symbols of the scatter appear, then they can appear anywhere and still reward you.

How to Play Geisha's Fan

Geisha’s Fan is a typical slot machine, so it won’t take long to learn it. The best way to get started is by taking a look at the paytable that shows symbols and explains all features.

In order to do this, you should open the demo version of the game here at Jackpot Casino. It’s free and won’t cost anything. When you’re confident enough, you can play it for real money.

If you prefer to choose a different bet size, then there’s two ways to do this. You can choose to place bets on fewer paylines (we don’t recommend this) or change the total bet size. In Geisha’s Fan you can place bets ranging from €0.9 per spin up to a total of €90 per spin.

The wild symbol in Geisha’s Fan is the Japanese woman. She can substitute for all other symbols, except the scatter. It can therefore help to complete combinations on the reels.

The scatter is the symbol of the fan belonging to the Geisha. If three or more appear, then you’ll be rewarded with 10 free spins, as well as a special expanding symbol during the bonus feature.

Geisha’s Fan is a slot machine coming from a provider called Tom Horn Gaming. They released it on the 20th of October, 2016. It’s been a popular choice by fans of oriental themes since it came out. In Geisha’s Fan you can look forward to wild symbols and free spins. It’s also possible to try your luck with a gamble feature. The maximum payout in the game is 5,000 times bet size. The theoretical return to player is at 96.13% and the gameplay consists of high volatility.
My rating