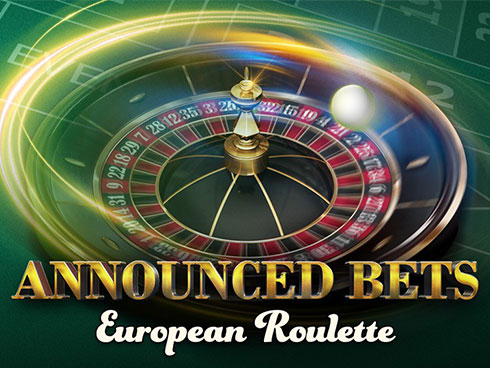 European Roulette Announced Bets is a title coming from Tom Horn Gaming. It was released in 2021. It comes with clean graphics and slick animations. You will hear the announcer in the background and enjoy the sound effects while spinning the roulette wheel.

In this game the theoretical payout percentage is 97.29% and the max payout is 36x.

Do you want to learn how to play European Roulette Announced Bets by Tom Horn Gaming, but do not have the confidence to play with real money just yet? Then we recommend that you try the demo version of this title, until you become familiar with bets, settings and more.

Your goal in this game is to guess where the ball will land on the roulette wheel. If you can manage to guess the right numbers, color and so on, you will be awarded with a payout.

European Roulette Announced Bets by Tom Horn Gaming have a house edge of 2.71%. This means that the return to player is 97.29%.

The max payout in this title is 36 times your bet size, which is fairly common for titles of roulette.

When playing European Roulette Announced Bets there are quite a few different ways to play each round. Let us have a look at some of the bets that you can make:

If you want to use Bitcoin (or other cryptocurrencies) to wager on European Roulette Announced Bets, you need to find a casino cooperating with Tom Horn Gaming. They also need to hold a license from Curacao, because this is the only regulatory body offering crypto.