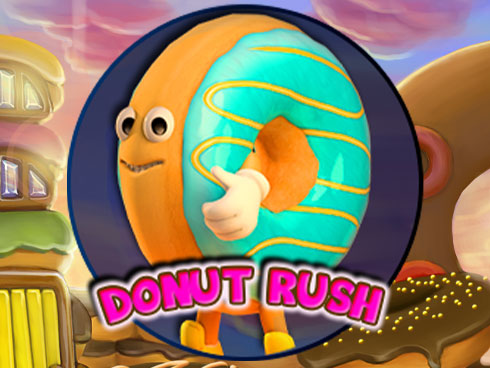 Don’t you just love everything that is sweet and tasty? To be a bit more specific, what about donuts with toppings that taste super good? If so, Donut Rush is the perfect choice for you.

Donut Rush is rather simple to get your head around, but we will get back to this further down.

If you would like to try this title it might be best to try the Donut Rush demo first. Instead of playing with real money right away, you can easily get familiar with the game this way.

Donut Rush is a game taking place in a world full of candy - donuts, cake houses and so on. The title is created by none other than Spinomenal and it is classified as a scratchcard game.

On the reels you need to match three symbols in order to win a payout. You can get both free games and other features if you are lucky while betting.

In Donut Rush there is only one way to place bets considering it is a scratchcard title. On the bright side this makes it a lot easier to get started and therefore enjoy playing the game.

Simply press the button called “Buy Ticket” in order to buy a round. Then click “Reveal All” when you are ready to see the results. You can also click on each of the boxes if you want to reveal them one by one for a bit more excitement.

Spinomenal is the software developer behind Donut Rush. This is one of the most popular names in the industry and they have created games that are favorites amongst many.

Furthermore they are licensed by a reputable regulatory body - Malta Gaming Authority. Their games are also audited by both eCOGRA and Bmm Testlabs to make sure the games are fair.

If you play in a casino that offers Bitcoin as a payment method, it will not be a problem playing this title. All the games from this developer, Spinomenal, offer the possibility to bet with Bitcoin. Then again the currency might change, so that you place bets with dollars, euros etc. after depositing depending on the casino.

Donut Rush is a great game for those who like sweet donuts and simple games. Spinomenal has made sure that their title is easy to understand and enjoyable at the same time.
My rating