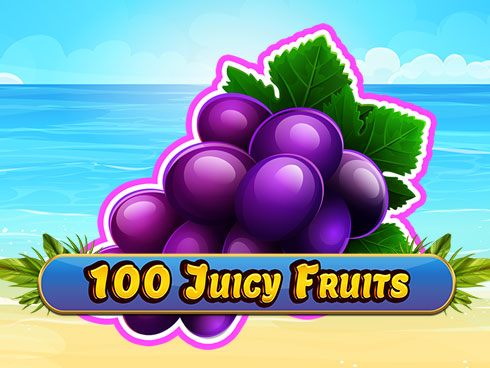 
Players can win up to x2000 their bet when they opt to play 100 Juicy Fruits by Spinomenal.


This fruit-themed slot game has up to 100 paylines in play but users have the choice over how many they want to have in action on the reels.


Spinomenal has created a few similar slots to 100 Juicy Fruits, with titles such as 100 Lucky Chilies and 100 Spinning Dice among those to be featured on the company's roster.


Available to play in a number of different languages and at a variety of online casino sites, 100 Juicy Fruits is likely to be a very popular pick.


For all the details about how 100 Juicy Fruits plays at online casinos, check out our full review.


This bright and colourful online slot game is a feast for the eyes - and is simple to play.


Like a lot of other slot games, 100 Juicy Fruits allows players to decide how many paylines they want to use, with a range of 10 to 100 offered by Spinomenal on this title.


After deciding on the number of paylines, users at online casinos also need to decide on their stake, which is set via a menu located at the bottom of the reels.


The spin button can be found in the middle of the reels, at the bottom of the screen, while to the left of the spin button is the max bet option, which is likely to be popular with high rollers.


On the right of the spin button is the auto-play function that has been included by Spinomenal.


Those who want to play 100 Juicy Fruits without clicking spin each time will find auto-play to be very handy, allowing them to sit back, relax and hopefully watch all of the wins roll in.


As is obvious from the name of the game, symbols are mostly fruits that will be familiar to anyone who has played old-fashioned slot machine games in the past.


There is also a sunshine which acts as the scatter, while the 7 is the game's Wild symbol.


Spinomenal is quite a new developer compared to established names in the industry. But the company has not made much of a splash as of yet and one of the reasons for this is the lack of slot features that have been included in games like 100 Juicy Fruits.


Online casino players these days expect a range of bonus features to be included. However, these are mostly missing on 100 Juicy Fruits, which has a grid of 5x4 for its reels.


The Wild symbol - which is the 7 number in this game - can expand to fill the reels and this is one of the best ways to get a substantial win when playing this Spinomenal slot.


Scatter symbols trigger the free spins bonus round, where players get six free spins. The free spins can be retriggered and the reels will also feature a 1x1 roaming Wild symbol as well.


Spinomenal is still making a name for itself in the world of online slots, but 100 Juicy Fruits is not the game that is going to launch it right to the top of the industry. With a return to player of 96.52 per cent, 100 Juicy Fruits is slightly above average in terms of value when compared to other online slots. However, balancing this out is the fact that volatility is high, meaning players can go through a lot of spins without receiving wins, depleting their balance quite fast. 100 Juicy Fruits is worth a go, but the lack of special bonus features reduces its repeat playability somewhat.