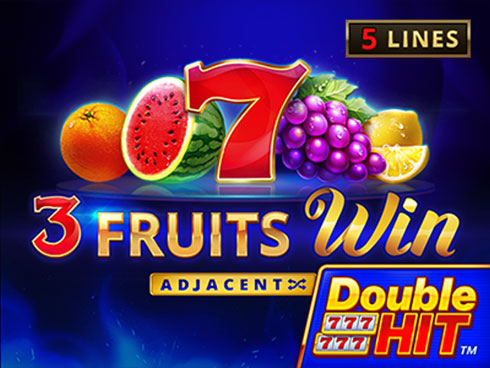 
Playson's April 2021 release 3 Fruits Win Double Hit is another addition to a successful series of slots that have become very popular picks at online casinos.


Double Hit games have been greatly successful for Playson so it is no wonder that the company is sticking to a winning formula with the 3 Fruits Win Double Hit game.


Following in the footsteps of other Playson games including Stars and Fruits Double Hit, players are likely to welcome 3 Fruits Win Double Hit's arrival into online casino libraries.


Vsevolod Lapin, the head of product at Playson, explained that the Double Hit mechanic created by the firm was initially targeted at online casinos in Germany, but is now being rolled out.


He said: "We look forward to incorporating the mechanic in future game releases and have no doubt that 3 Fruits Win Double Hit will prove popular in a wide range of international markets."


For all the details about playing 3 Fruits Win Double Hit by Playson, read on for our full review.


Playson has had a lot of joy with its Double Hit game mechanic and online casino users who have played titles such as Stars and Fruits Double Hit will understand how to play 3 Fruits Win Double Hit straight away as it has a very similar format.


The bottom of the screen is where users should start on 3 Fruits Win Double Hit as this is where the stake selection can be found. Players should click or tap the coin icon to change their stake.


Next to this is the big yellow spin icon, which is accompanied by an auto-play function to the right. Online casino users who like a relaxed slots experience can use auto-play on 3 Fruits Win Double Hit to avoid having to hit the spin button all the time.


Symbols on 3 Fruits Win Double Hit by Playson are made up of classic slot game icons such as cherries, lemons, oranges, watermelons and so on. There is also a 7 icon and a star symbol.

Online casino players will have seen most things in slots by now but the 3 Fruits Win Double Hit by Playson might still surprise them because there are two sets of reels in the game.


This is the Double Hit game mechanic by Playson that has been such a success at online casinos. Each set of reels has five paylines in play, with classic slot sounds in the background.


Among the top features of the game is that symbols on 3 Fruits Win Double Hit can appear stacked on the reels in both of the slot's fields. The chances of winning combos is therefore increased as a result, adding to the reasons to pick this title on online casino sites.


However, there is no 3 Fruits Win: Double Hit free spins round, which is a bit of a shame.


Playson's Double Hit game mechanic has been enjoyed by a lot of players at online casinos, with the company hoping to succeed again with the 2021 release of 3 Fruits Win Double Hit. Having two sets of reels in play makes it more likely to land winning combos, but the fact this is a highly volatile slot has to be taken into account by players as well. The game is very mobile-friendly and a return to player of 95.56 per cent ranks it in the middle of the pack. Overall, the Double Hit game mechanic by Playson makes 3 Fruits Win Double Hit well worth trying out.