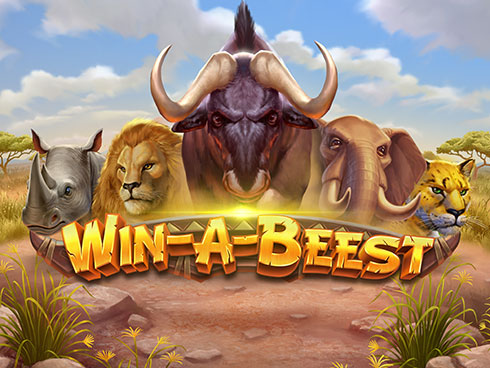 
Top slots studio Play’n GO has come up with a winner in its animal-themed game Win-a-Beest, which like a lot of slots these days is set in the plains of Africa.

Released by the developer in July 2020, Win-a-Beest sees players hoping to win big from symbols that appear on a 2-4-4-4-2 diamond grid. As is clear from the name of the game, the slot has been inspired by the magnificent wildebeest, which Play’n GO describes as a "super- symbol" as it only needs two to payout, not three.

Play’n GO suit Martin Zettergren describes the game as being "all about power", adding in a statement when the game was released: "The Wildebeest is a powerful animal, and it combines with a strong paytable to give players more powerful wins."

For all the other details that players need to know about the wildlife-themed online slot game Win-a-Beest, read on for our full review.


The 2-4-4-4-2 diamond grid that is in play on the Win-a-Beest online slot game is a little different, but it changes into a more typical 5x4 layout whenever one of the special features is triggered. Technically there is a single fixed payline but really this is an online slot with 243 ways to win.

When playing the Win-a-Beest online slot game by Play’n GO, users should start by selecting their stake size. There are a number of options and they are all displayed at the bottom of the screen, below the reels of the game. To the right of the stake selection menu is the green play button, which spins the reels. Next to that, in the bottom-right corner, is the game's autoplay function. Those who do not want to have to tap or click the play button for every spin will likely find autoplay to be a very useful option.

Animal symbols include the leopard, rhino, elephant and lion, though it is the titular wildebeest that players will be hoping pops up on the reels the most. The symbols also include online slots card classics J through to A, which are the lowest-paying symbols in the game.

Bonus features are where the Win-a-Beest online slot game really comes alive. Slots studio Play’n GO is known for packing its titles with bonus rounds and Win-a-Beest delivers here. The Beest Mode feature is where we will kick things off. This can be triggered from any single spin of the reels on the slot. When it is triggered, the reels will expand to a familiar 5x4 layout, which also happens whenever any of the other special features on the game are triggered. In Beest Mode, which offers more than a thousand different ways to win, Win-a-Beest players will only see Wildebeest, Wilds or Scatters on the reels. During Beest Mode, players will be hoping for a trio of scatters to appear on the reels, as this launches the Beest Mode spins. In the Beest Mode spins, the free spins can also be retriggered by landing more scatters. When scatters appear in the main game, this is where the game's Stampeding Spins begin. Players receive 8, 12 or 20 free spins depending on how many scatters appeared on the reels. Beest Mode can also be triggered during the game's Stampeding Spins, so big wins can happen here. The Multiplier Wild is another way to win big on the game and it can land in any game mode included in the Win-a-Beest online slot game. The maximum billed win is 10,240x the total bet.


Play'n GO is not known as one of the best slots studios around for nothing, with the Win-a- Beest online slot game another hit for the company. Absolutely packed with a range of bonus features, players who pick this game at online casinos can land 10,240x the total bet from a single spin of the reels. RTP for the Win-a-Beest online slot game stands at 96.12 per cent, which is in the middle of the road, but the high number of bonus features help to ensure it is a lot of fun to play.