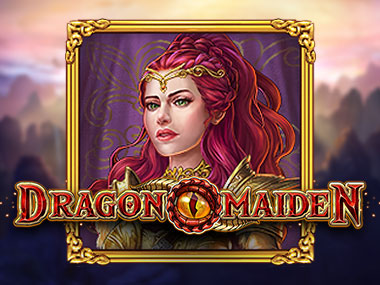 Do you like fantasy-themed slots of fire-breathing dragons? Then Dragon Maiden will be a great fit for you. This is a slot machine created by the best software provider in the industry. Play’n Go released this title back in 2018 and it quickly became one of the more sought after titles.

Dragon Maiden comes with several features like expanding wilds, respins and free spins. This means you will be entertained while spinning with the possibility of getting some massive wins. The biggest payout in Dragon Maiden is 5000 times your bet. The RTP on the other hand can vary depending on the casino you play in, but will most likely be somewhere close to 96%.

The slot has 5 reels, 3 rows and there are 243 ways to win. This means that you only have to look for identical symbols to land from left to right. Either way you will get a reward, because it does not have to land on a specific paylines. This makes it easier to know what to look for.

How to Play Dragon Maiden

Dragon Maiden is a simple but fancy slot machine. You will easily understand how the game works after having a look at the paytable - click the information button to learn more about it. To change your bet size use the - or + button at the bottom of the slot (located in the middle).

If a scatter symbol (the dragon) appears on the reels you will be awarded with a respin. The reel the dragon landed on will be locked in place and the other reels will spin. Getting additional dragons will give you extra respins. If you get three or more of them you also get free spins.

During the free spins bonus landing more scatter symbols will increase the size of a reel with one row. If the reel becomes fully expanded (6 rows) you will be awarded with one Golden Spin. If another dragon lands in the same reel you will get an additional Golden Spin and so on. During the Golden Spin-feature there are 7776 ways to win, because the grid turns into 5x6.

Dragon Maiden is an amazing game created by Play'n Go. The potential of winning big, up to 5000x, in the bonus game makes the slot very exciting. It also has respins and expanding wilds.
My rating