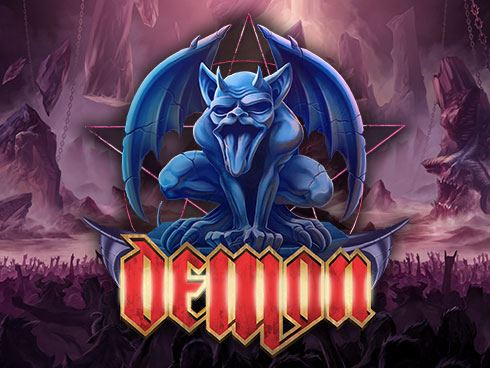 What is Demon really? Well, this is an English band formed back in 1979 by a couple of guys named Dave Holl and Mal Spooner. the group is considered iconic for the British heavy metal movement. The playing field is a 5x3 grid with 30 paylines. RTP 96.50% good. There is also a free spins game where you can win from randomly selected win multipliers, and where Hell Spins can come into play if the free spins feature is reactivated. Read our review and give this slot a try on Jackpot Casino.

How To Play Demon

The Demon video slot is a model with five reels, thirty fixed lines for winning combinations and fifteen slots for icons on the screen. The range of rates is wide. You can bet from 0.01 to three euros per line. The game offers basic symbols, two types of jokers, free spins with bonuses, additional multipliers and other gameplay options. Paid chains are made up of at least three symbols of the same type. The elements should line up from left to right, forming a continuous sequence on any of the thirty lines. There can be several such combinations in one round. Winnings are calculated according to the bet and odds from x10 to x500. These indicators are multiplied. The accrued money is summed up and transferred to the general balance. You cannot try to double your payments. The creators of the video slot painted on the drums the soloist of the group, a grave cross with the hands of a corpse, ominous statues and a colorful character with a mask in his hands. Letters and numbers also appear, traditionally representing playing cards.

Wild Amulet (gold amulet with a blue eye) is used as a joker, replacing other symbols in combinations. It drops out in the first and fifth reels. Wild Mask (mask of a demon with horns) can also be used instead of other icons, except for the amulet. He is also able to form chains on his own. One Helluva Night Free Spins - The round begins with two amulets and a mask. If Wild Mask is in the middle cell, there will be eleven free spins. In other cases, there are six of them. In each spin, a multiplier of up to x8 is used. Its size is determined by a random number generator. This ratio is taken into account when payments are calculated. Two amulets open a portal to hell and start Hell Spins. Combined with the mask, they give up to ten more spins. Portal to Hell - A portal is launched, which determines the number of free spins. In them, the additional coefficient is doubled. At the end of the Hell Spins, the remaining Free Spins continue.

As you would expect from a slot based on a heavy metal band, it is loud and dynamic with some interesting features. Central to the action is the Wild Mask function - it appears only on the middle reel and converts all instances of the singer's symbol into wild symbols. Take a closer look at this game and give it a try on Jackpot Casino.
My rating