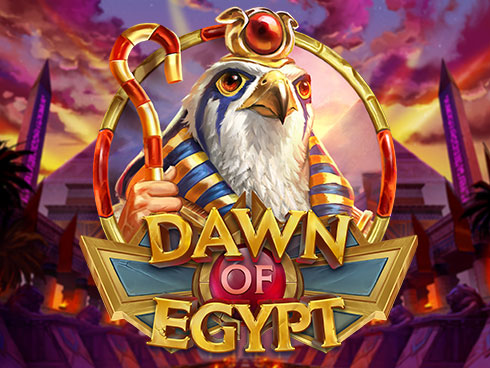 Intro to Dawn of Egypt

Play'n Go's Dawn of Egypt slot machine has 5 reels, 3 rows and 10 pay lines. Video slot on a very popular theme of Ancient Egypt. The game stands out from the general background of online slots with its relaxed design and gameplay. It features free spins, scatters, wild symbols, various multipliers and a bonus wheel. The slot has everything you need for an intriguing game and good payouts. A game with high volatility and an RTP of 94.19%. Give this slot a try on Jackpot Casino. You will not regret.

How To Play Dawn of Egypt

This slot machine in the casino has 5 reels, 3 rows of symbols and 10 active lines that cannot be configured. Coins are not used for bets, so the spin price is indicated immediately in credits in the casino's currency. It can change in the range from 0.1 to 100. During spins, non-standard functions or re-spins are not used, and there is no risk game familiar to many. Prize combinations are drawn exclusively on the lines and must include at least 3 symbols located on adjacent reels. You can only win money for sequences that start on the leftmost reel. The scatter is an exception and payments for it do not depend on the position of the icon on the field. The maximum prize is x5000 bets. RTP - 96.23%, volatility is high. low paying symbols are card signs. High paying symbols look much brighter and richer. The pictures of the gods - Horus and Bastet - are drawn as portraits of characters, while the rest of the elements with the image of a lotus, a snake, an ankh is the more reminiscent of expensive jewelry.

Slot Features of Dawn of Egypt

There are two special symbols in the slot machine: wild and scatter. The first looks like a brooch with a picture of a scarab. The icon replaces all other elements in the prize combinations and is able to form a paid sequence by itself. Drops on all reels and appears quite often. The second element with additional features on the field is a pyramid-shaped scatter. It launches free spins and brings winnings for collecting 3 or more icons on the field. The scatter does not depend on the lines, and its coefficients are applied to the total bet. If there are 3 characters in the cells, the user will receive a multiplier of 5, if 4 - x20, 5 - x500. Free spins are activated if the reels manage to collect at least 3 scatters at the same time. They launch the Divine Wheel, which randomly determines the number of free spins that will be awarded to the player. The bonus becomes available after a small animation - the player leaves the temple and goes to the pyramids. There he again sees the reels, above which three indicators are installed. The far left displays the number of free spins won and the remainder of the free spins. There can be from 3 to 20 of them. The central indicator displays all the high paying symbols that are available for the game. Before each spin, one of them is randomly selected, after which all the icons that are to the left turn into it. The same thing happens on the pitch. Accordingly, if Horus was chosen at random, only he will remain from the high-paying symbols on the reels. This feature is called Symbol Upgrade and is one of the main advantages of the slot machine. The bonus function has one more secret - a pyramid of gold, which in normal mode is a scatter, and also becomes a wild during free spins. It replaces any symbols in prize combinations on the lines and generates paid sequences itself.


Although users got the opportunity to play Dawn of Egypt for real money at online casinos relatively recently, the slot has already collected a lot of reviews and positive reviews. Beautiful graphics and exciting mechanics make players forget about other slot machines for a long time. Will it become a real hit or add to the huge list of ordinary devices - time will tell. In the meantime, users around the world are actively playing it for money.. Take a closer look at this game and give it at try on Jackpot Casino.
My rating