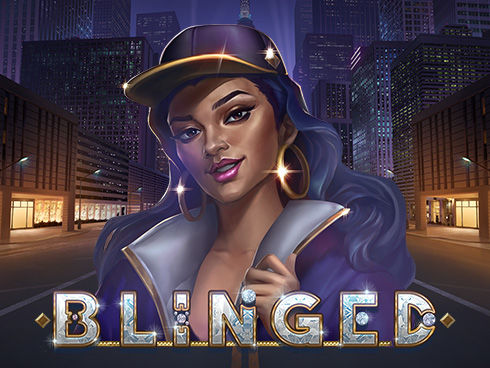 Hip-hop is not as popular in the gambling industry as it is among the music genres that have dominated the entire industry for many years. the developers decided to "revive" the theme and again involve the players to spin the reels on the rap-themed slot again. Following in the footsteps of its success, Play'n Go offers a completely new slot, but with a facelift with women at the head, Blinged. To all the music lovers, try spinning on Jackpot Casino.

How To Play Blinged

Downloading the game will take you to the very center of the metropolis, presumably New York, which, despite the night lights, is full of light. Thus, Play'n Go hints to us that you have met girls who prefer a busy nightlife with trendy and expensive clubs. Ypu are playing on 5x3 reels with 96,25% RTP and medium volatility. Payable offers a set of 10 common symbols, divided into highs and lows. On the downside, we get the regular pack of A-10 royals and low-income diamond models. the allowances are better and include, in ascending order, money rolls, gold sneakers, gold signet rings, a trio of ladies and a female rapper as the main star here. Blinged also features a wild symbol, which is represented by another female MC. To win, you need at least 3 symbols on a payline, and the highest rewards come from 5 unique combinations.

Blinged only has 2 features including Win Spins and Respins. The key to both functions is the scatter symbol that can appear on reels 1, 3 and 5 during the main game. Get three scatters to activate the Win Spins feature, which guarantees you multiple successful spins. Pressing 3 scatters gives 5 winning spins, and each additional scatter that appears during this feature gives a +1-winning spin, a maximum of 20. if you land a non-winning spin, there will be a re- spin. each respin increases the growing multiplier by 1x, and the multiplier is not reset between spins.

Gambling software manufacturer Play'n Go has announced the release of a new video slot, Blinged. The theoretical rate of return (RTP) is 96.25%, the volatility of the slot is average. The slot has five reels, three rows and ten fixed lines. A mulatto woman, a group of girls, a gold ring, stylish sneakers and a wad of money are used as high-paying symbols. Wild in the form of a rapper replaces any character. Win big with Jackpot Casino and Play’n Go.
My rating