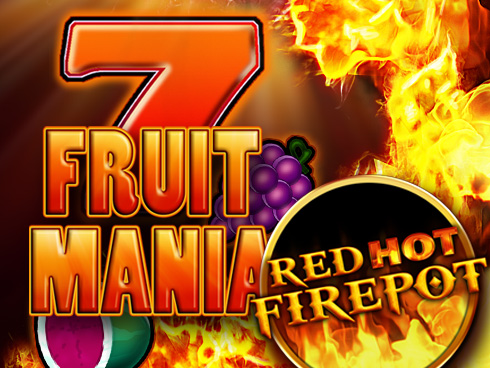 Would you like to play a classic slot machine with a unique jackpot feature? If that’s the case, then we recommend taking a look at Fruit Mania RHFP. This is a popular title coming from Gamomat. There are several versions of this game like Fruit Mania, Fruit Mania Golden Nights, and Fruit Mania Double Rush. If you like this one, you could also try the other slot machines.

Fruit Mania RHFP has 5 reels, 3 rows, and a total of 5 paylines. It offers a maximum payout of 1,000 for five identical symbols of the number seven, but can pay up to 10,000x with the Red Hot Firepot feature activated. Make sure you do so, if you want a chance to win this amount. Furthermore, the return to player of this game is 96.12%, and the standard volatility is medium.

How to Play Fruit Mania RHFP

Do you want to learn how to play Fruit Mania RHFP? Great! You’ll do so in no time. You should start by opening the demo version here at Jackpot Casino. Then you can take a look at the paytable. You’ll find it by clicking the blue button in the bottom right corner. Here you’ll see all the symbols and their payouts, as well as an explanation of how the Red Hot Firepot works.

Fruit Mania RHFP is a slot machine that’s suitable for both low rollers and for high rollers alike. Why is that so? Well, it’s because the possible bet ranges from €0.05 up to a total of €100. If you activate the Red Hot Firepot, then you can bet a total of €101, if you’d like. In most Gamomat slot machines it’s possible to change the number of paylines, but it doesn’t work here.

On the reels you can see blackberries, bells, watermelons, oranges, number seven, cherries, and lemons. In other words, it won’t take long before you become familiar with all of them. You’ll need at least three identical symbols to appear on a payline to hit a winning combination (only two if it’s of the cherries).

Fruit Mania RHFP, or Fruit Mania Red Hot Firepot, is a slot machine coming from Gamomat. It has 5 reels, 3 rows, and 5 paylines. You can win up to a total of 10,000x with the Red Hot Firepot activated, if it’s not then you can win 1,000x for five identical symbols of number seven.
My rating