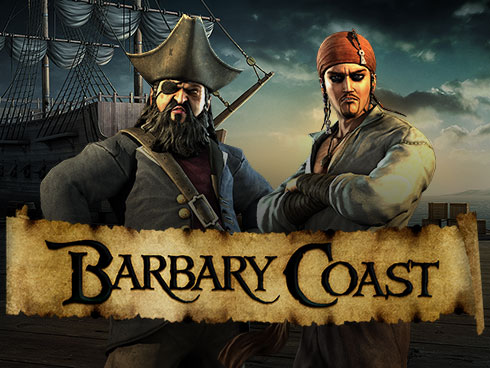 Do you like pirates and pirate ships? What about chests full of golden treasure? Then Barbary Coast by Betsoft will suit your preference perfectly. Everything associated with being a pirate is to be found while spinning the reels in this slot created by the popular software provider.

The symbols you will get familiar with are a beautiful lady, a pirate skull with crossed swords, a treasure chest, gold coins, a pistol, a compass, a treasure map, a cannon, a barrel, a parrot and a pirate, as well as Ben Sawyer (the main character) and the one and only Captain Blackbeard.

How to Play Barbary Coast

Barbary Coast is a rather calming slot considering there is no music to be heard during base play. Then again there are sound effects when you’re spinning. If you don’t like the sound effects, you can simply turn them off by clicking on the button in the top left corner.

You can click the same button to change your bet and become familiar with the paytable. The lowest bet per spin is €0.01 and the max bet is €45.

Barbary Coast has 5 reels and 3 rows, as well as a total of 30 betways.

If 3 or more parrots appear anywhere on the reels you will be awarded with 5, 10 or 15 free spins. No other feature can be activated during this bonus, but you will have the chance of winning a great sum of money for no extra cost per spin.

If a cannon appears in the middle of the center reel then Wild Reel will be triggered. This feature will make sure that the third reel is acting as a wild from top to bottom for one single spin.

The three different bonus games are Click Me, Crog Challenge and Fight Bonus. If you are lucky enough to get one of these while spinning, you can be sure to grab a prize back to the main game.

The RTP in Barbary Coast is rather low at 93.2%. Then again, you will potentially be able to win some great prizes while playing this slot.

It is Betsoft Gaming that is the creator of Barbary Coast. This slot was launched in 2009 and has an RTP of 93.2%. You will be able to experience 3 different bonus games and a free spins bonus. Respins are also present in Barbary Coast.
My rating