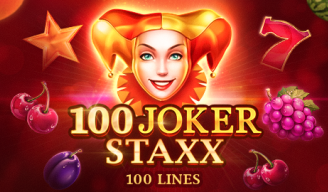 
Released in January 2019, 100 Joker Staxx is one of dozens of games to have come out of the Playson studio over the last few years. Part of the Timeless Fruit Slots campaign by the iGaming developer, 100 Joker Staxx boasts features such as a stacked Wild symbol and has 100 ways to win, as per the game's name.

In 100 Joker Staxx, Joker portraits stack as Wild symbols while the other symbols that feature in the game include classic fruits and a bar symbol. There is also a scatter symbol in this game, which like all Playson titles has been tested and certified for all major European regulated territories, as well as for a wide range of other nations around the world. For everything that you need to know about playing the 100 Joker Staxx online slot game by Playson at online casino sites, read on for our full slot review.


100 Joker Staxx has a classic design that makes it a solid choice of online slot for anyone who is new to playing this kind of game. The slot works in coins, so the first thing players who choose 100 Joker Staxx need to do is to decide how many coins to stake on each spin. To change the desired stake, players should tap or click on the coins symbol, which brings up the various options that are available. The stake per spin can be changed after each spin. After setting the stake, players just hit the green button in the middle, below the reels. During the spin, players can hit the button again to get an immediate outcome rather than having to wait for the reels to stop. Most people will just prefer to wait and see whether they have won, though.

To the right of the play button is the 100 Joker Staxx autoplay function. Players can set how many automatic spins they want on 100 Joker Staxx or instead opt to set a loss limit.


It is fair to say that 100 Joker Staxx is not exactly packed with bonus features compared to many of the other slots that are available to play at online casinos these days. It is also very similar to other games in the Timeless Fruit Slots series by Playson, with a slightly different design all that it has to differentiate it from sister slots by the same company.


Laid out on a grid of 5x4, the Wild symbol is the joker from the name of the game. This will be familiar to anyone who has played other Playson slots, while a gold star acts as the scatter - this is also the most lucrative symbol in the game.


The fact there are 100 different ways to win on each spin means that there will be regular payouts on the 100 Joker Staxx slot from Playson, but the absence of any bonus features such as a free spins mode is certainly quite a shame.


100 Joker Staxx is a solid slot for online casino customers who are not too worried about a rack of bonus features on their preferred games. It has 100 ways to win, ensuring regular payouts for users who opt to spin the reels, while Wilds on this game are also stacked, which is always a good thing too. While it is undoubtedly quite a basic offering from Playson, RTP of around 96.5 ensures good value for those who opt to try their luck on 100 Joker Staxx at the online casino.