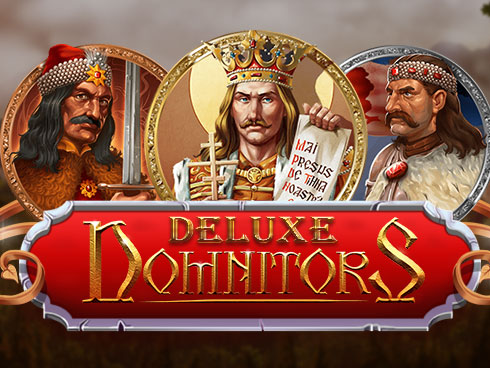 Do you love history? What about the medieval ages from approximately the 5th to the late 15th century? If so, this title is the perfect choice for you. Domnitors is a fantasy slot machine with a medieval theme that will drag you into a world that finds itself in conflict between countries.

On the reels you will notice symbols like a bow & arrow, swords, axes, maces, fortified castles, a king and a general. You will also see a barbarian (the wild symbol) and a map of the nations (the scatter symbol). Click on the paytable in top right to learn more about each of their payouts.

Domnitors Deluxe was released in 2018 by BGaming and is the sequel of the first game named Domnitors by the same software developer. Both games are equally popular amongst players.

Domnitors Deluxe comes with even better graphics and animations than its prequel. We must also say that the soundtrack in the background and the sound effects makes it all super exciting. You can get the vibe that the king himself has returned to the castle while waving to the people.

How to Play Domnitors Deluxe

This title comes with a set of 5 reels, 3 rows and a total of 9 paylines. The return to player (RTP) in Domnitors Deluxe is more than good. It is higher than the industry standard being at 97.31%.

The biggest win obtainable in Domnitors Deluxe is a massive 10 000x the original bet.

There are several settings that you change in order to make the experience even better. The most important thing is the size of your bet. Pick the amount of paylines you want activated in the button left (by using either the - or the + button).

To change the bet value itself you need to click the - or + button in the bottom right. The bet value in Domnitors Deluxe ranges from €0.02 and goes all the way up to €1.00.

If 3, 4 or 5 scatter symbols land on the reels after a single spin you will get 15 free games. During the bonus all wins will have a 3x multiplier attached, which will drastically increase wins.

The wild symbol in Dimnitors Deluxe will substitute for all other symbols except the map (the scatter), and all wins with a wild symbol will double the payout.

Domnitors Deluxe comes with a gamble-feature that can double your wins if you are lucky.

Domnitors Deluxe is the sequel of Domnitors by the same software developer (Bgaming). The RTP is 97.31% and you can win 10 000x. There are both wild symbols and scatter symbols in the slot that can increase your wins. Especially in free spins where all payouts are 3x.
My rating

+18
Jackpot Casino, we bet you'll love it
Jackpot offers a new way to play, and a unique way to get the most out of playing. We are South Africa’s first online casino to offer bonuses with no wagering requirements. You heard that right – NO WAGERING REQUIREMENTS! Yes, there are terms and conditions (there have to be so we can keep our license and comply with regulations) but when you claim your bonus from Jackpot you know exactly what to expect: no hidden catches, no impossible target to reach before you withdraw, no reasons for cancelling your wins, just straightforward, fun, rewarding play.
WE ARE THE PLACE TO BE
Our focus is on bringing you the latest and greatest slots games – especially those big, juicy progressive jackpot games – as well as a full offering of table games and live dealer games. Add in amazing bonuses, sweet promotions, the latest news and a team who are always here for you and you will soon see why we are called Jackpot.
South African online casino players are spoilt for choice when it comes to just how many online casinos we can choose from. But the one thing that we’ve been missing is a playing partner who is truly in it for the joy of playing – until now.
© 2021 Jackpot Casino All rights reserved. Hub88 International B.V. (Company). The Company is licensed and regulated by the Government of Curaçao under the gaming license 14827 Kaya Richard J. Beaujon Z/N Landhuis Joonchi II, Curaçao, Netherlands Antilles.